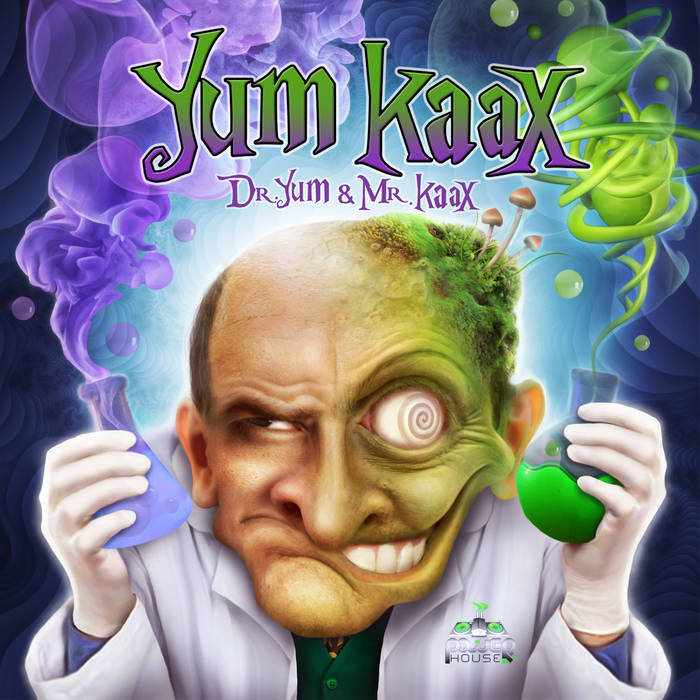 Power House is known for pumping and potent progressive psytrance and with each new album something unique and special appears! This incredible project is by no means a new name and they have managed to appear in many great festivals and parties around Europe. Now this debut album long awaited and eagerly anticipated marks the next level! Yum Kaax is Klaus Gervin Nielsen and Jakob Gottlieb Svendsen, Copenhagen, Denmark and their tight sound, massive bass lines and twisted leads bring a nice alternative to the "usual" sound of modern progressive psytrance. Yum Kaax's songs are usually in the 137-142 BPM range using live controllers and synths often as part of the experience, twisting the sound or adding live melodies. With nine exclusive chunky and funky original goa prog psytrance songs presented along with an epic downtempo melt down closing track, Dr Yum & Mr Kaax bring the most potent prescriptions that the worlds partiers and dj’s will enjoy for years to come. Yum Kaax is always looking forward to the next adventure, enjoying the vibe and sharing the happy times, around the world. Yum Kaax would like to personally share their special thanks to Necton, N.A.S.A., Messy Mass, Joachim Heyde Debell and Jonathan Meyer Harrison, Ayalien for making the artwork as well as Hector Ovnimoon and the Geomagnetic/Power House team for all the help on this debut album release.
Coming from a background of alternative rock music, they both started attending psychedelic trance parties in about 2003. Full of inspiration from travelling around the world for the festival vibe and searching for more sun than Denmark can provide, they decided to start experimenting with Psychedelic Trance production. In 2005, Yum Kaax was formed. The early tracks were progressive psytrance, but soon they discovered the joy of downbeat psychedelic trance / psy dub and decided to do both! They have created their own downbeat sound combining powerful bass, world instruments and percussion, often inviting friends along with their instruments and their musical talent. Meanwhile they have continued to explore and experiment in the psytrance genre. In 2009 the first live psytrance set was ready, and since then they have played both in Denmark, Sweden and Germany. Playing around Copenhagen at underground parties, they have become well known in the Copenhagen underground, but they have also been traveling playing at festivals such as Vuuv 2010/2011, Voltron Festival 2012 and Midgard Fest 2013. Yum Kaax is always looking forward to the next adventure, enjoying the vibe and sharing the happy times, around the world. www.facebook.com/YumKaax www.yumkaax.dk
Power House has Proven to the be the Perfect Provider of Premium Progressive! Power House Records specializes in Progressive, Trance Electro and all sorts of Powerful “House” Music, expect to see innovative and cutting edge releases pumping out of this super blasting EDM. The world is ready for house music with more power and a special Euro-American twist to give it new life. Power House Records is this new blood to PUMP IT UP!