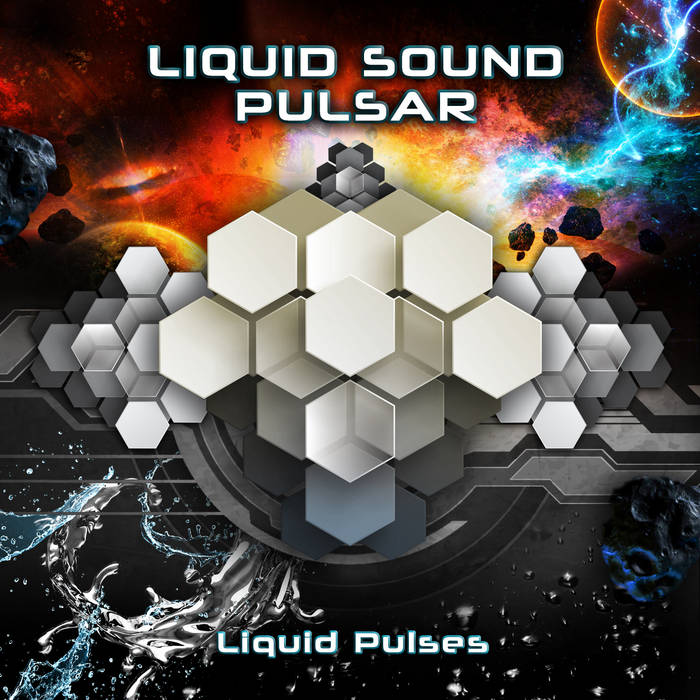 Power House Records is thrilled to announce this astronomical fusion of cosmic energy & elemental components with the combined forces of LIQUID SOUND (Serbia) & PULSAR (Chile) “Liquid Pulses” debut collaboration progressive goa techno psychedelic trance studio album! With this dynamic duo’s new creation you are treated to the results that came from years of world touring, dance floor exploring, and tons of studio time. Each artist producer already has countless singles released on top labels as well as each of their own critically acclaimed solo albums. Surely even the most potent enriched uranium has nothing compared with sheer power of this new element that has been created in the world’s most advanced meta-physics astro-dynamic laboratories! CERN scientists from Switzerland were instantly thrown into a jealous tizzy when they enviously realized the profound galactic implications derived from our statistics. Without even needing to hear the awesome and instantly hypnotically addicting previews you will automatically have the instinctual “BUY ME NOW” response as you read this engaging and deeply impulse inspiring promo description. In fact after buying the album you even came back to finish reading all about each of the artists because they are both world class Psytrance Mega Producers who love to deliver massive dance floor satisfaction! Liquid Sound project was started by Branimir Dobesh many years ago. At the beginning it was meant to be a fullon psytrance project, but after few years of experimenting with sounds, music styles and his own patience, the project became much more progressive. Now it’s a fusion of chill out atmospheres, ambient feel and fat progressive psytrance beats mixed with beautiful melodies. His tracks have been released such labels the leading electronic dance music portals such as: Ovnimoon Records, Goa Records, Power House, Fresh Frequencies, Sting Records, EDM Records, YSE, Dacru, Triptonite, Freakuency, Geomagnetic.tv, ZOO Music, Psylove Records Planet B.E.N., Synergetic, Sin Records, Midijum… He has been collaborating with many of the most well established progressive psy producers from across the globe such as Shogan, Ascent, Pulsar, ArgonNight, Yahel, Monolock, Atomic Pulse, Thaihanu, ProgBit, Source Code, Elegy, ProtoActive, Fyono and many more. He is also working on his chill / ambient / liquid d’n'b project – Blue.
Pulsar´s real name is Manuel Benavente from Santiago de Chile. He started his career as DJ playing in parties at the age of 13, but only in the year 2007, he started playing Psytrance.In 2008, together with DJ Hanu, they created the “Implosion Project”. End of 2009, he along with DJ Antark, started “Mision Paralela “ in the same year he start to create his own music with "Thaihanu" and "Pulsar & Thaihanu" see the light with incredible success. Since then everything went perfect to open the doors in the Chilean scene to present his Live-Act. He has participated in events like: Juracid Beats, Montemapu, Electro Roots, Spacetrance, Summer & Psy, Space Invader, Magic Mushrooms, Timelessness, Aztec Contact , Moonflower and many others, sharing stage with artists like: Ital, Telepatic, The First Stone, Burn In Noise , Altruism , Ace Ventura , Via Axis, Pragmatix, Cosmos Vibration, Prosonik, Moaiact (Psypsiqjicuri), Astral Projection, Ovnimooon, among others...

Power House has Proven to be the Perfect Provider of Premium Progressive! Power House Records specializes in Progressive, Trance, Electro and all sorts of Powerful “House” Music, expect to see innovative and cutting edge releases pumping out of this super blasting EDM label with offices in both Germany and California, two of the most well known capitals of Techno House Music. Power House Records produces releases on Vinyl, Digital EPs, DJ mix CDs, and exclusive digital singles. PHR (Power House Records) has a worldwide distribution network and is most known for its white label releases that have sold like hot cakes every time they surface. The world is ready for house music with more power and a special Euro-American twist to give it new life. Power House Records is this new blood to PUMP IT UP!